It was a night where Tuffs  ‘dressed to impress’ as all the Lycra and sports gear were left behind for an evening of glamour as a full house gathered to celebrate our achievements over the past twelve months.

Whilst Tuff Fitty train and race hard, we also play hard and our Master of Ceremony, Mr Andrew Ward did a summary of the years highlights with much humour and banter. One of the features was the presentation of the awards from Tuff Fitty’s club championship races The Sprint Championship was a keenly contested affair at Steyning Tri.  Joe Pascoe & Nikki Gatland were the overall champions with Ollie McDonald & Jane Custance being the recipients of the 2nd place award. Third place was awarded to Tom Goddard and Clare Worgan.  In addition Matt Whittaker gained recognition for his Veteran title and Tony Pearce for Super Vet, with Claire Moyle Female Supervet There was an interlude whilst the main course was served, and several trips were made to the bar, before the presentation of the Standard Championship awards. The venue was the Worthing Triathlon, and whilst several club members took part in the qualifying Sprint race the Standard distance was competitive under the hot morning sun.  Our Champions were Tom Frith & Nicole Patterson-Lett. Joe Pascoe & Sharon Tidmarsh took the honours as runners up, with Matt Whittaker gaining a third place award.  Simon Thistlethwaite won the Veteran award in this category. The flurry of awards whetted the appetite for desert, and more drinks before the final category of awards. First up the Middle Distance Championship which saw a large contingent race under the horrendously, wet, cold and windy conditions that were served up at Ironman 70.3 Weymouth. Battling through the conditions to prevail were Tom Frith and Nicole Patterson-Lett as overall Tuff Champions. Joe Pascoe and Sharon Tidmarsh took second place and third place awards went to Ollie McDonald and Tiff Orton.  Chris Robinson picked up the veteran award and Trevor Harvey the Legend award.

A silver marker pen was on hand as all the Ironman 70.3 participants were invited to sign the Ironman Division 2 trophy which Tuff Fitty won in September. It was a great achievement on top of our Team award just a week earlier at the Rewell Wood Running Festival, where Tuff Fitty triumphed against keen competition from many of the local running clubs over a mix of marathon, half and 10k distances. Both trophies here:- There was still time for an Outstanding contribution award to Claire Moyle who has had an incredible year. Claire threw herself in countless swim, bike and run events, conquering any doubts doing longer bike rides, open water swims, different distance runs and triathlon…. all the while sporting her continual smiling face;  – a clear winner from the coaches and committee.  Just before the floor was cleared for dancing and more trips to the bar, chairman Clive Harvey was thanked for his work during another year in office.

The club are grateful to the committee for their hard work in organising the event, particularly Nicole Ewer, Catharine Western and Tom Gray.

Looking to be an award recipient next year? The Sprint championship was voted in as Arundel Lido Tri; the Standard Distance has been chosen as Worthing again, and the clear winner by a large margin in the survey undertaken is the 70.3 race distance of Midnight Man. If Christmas finances permit, do not delay entering as the Raw Energy events have phased pricing and Midnight Man tends to fill quickly.   As soon as members renew their membership for 2019 we can post a little inducement to help entering the Raw Energy events

A few photos from the Tuff family album of a successful evening follows (click on the picture to view):- 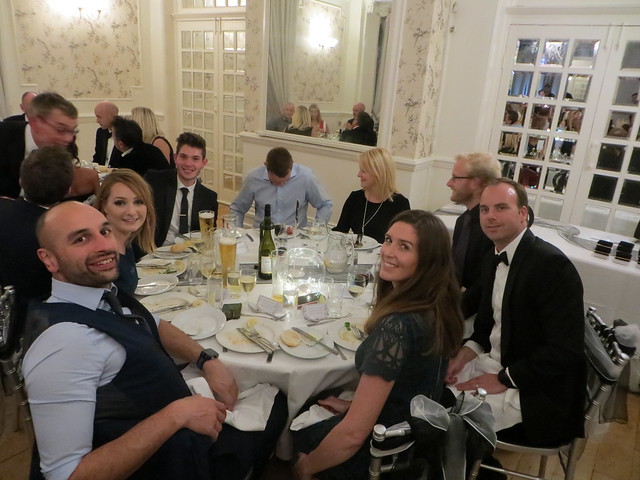