Tuff Fitty’s mental health initiative #not2TUFF2talk saw us link up with Worthing Rowing Club for an event on Sunday 21st July. The Rowing Club are also adopting a mental health charter and so this inaugural event was staged to help raise awareness, strengthen our ties and help our local MIND branch.

Our lead ambassador for #not2TUFF2talk is Graham Liddell. Together with his sub committee, the Row Row Row and a bit was organised and Graham takes up the story:-

“At the end, they were enjoying each other’s company, holding aloft their trophies, clutching their medals, posing for photos and tucking into a sumptuous feast*. They had also raised more than £65 for Coastal West Sussex MIND and on their journey practised four of the five ways of wellbeing**:

* Not at the same time, obviously. That would have got messy.

** If only they had listened when Jon described the run route and not cheated, we might have claimed part of the fifth and final way to wellbeing: taking notice of things.

It was also quite good fun. Here is the race report…

“I’ve never been on one of those things, before. How do they work?” squeaked the triathlete

“What? Even the rowers have got to run 2k?  I’m not sure my knees are up to it.” complained the rower.

“That’s not bad, actually” lied one of the rowers

“I’m not sure there is much I can do to help” said another truthfully.

The event was about promoting mental health through physical activity and wasn’t really about winning or losing. But for the record the cup winners were (apologies I don’t know the surnames of the rowers):

The other teams were:

Special thanks also go to: 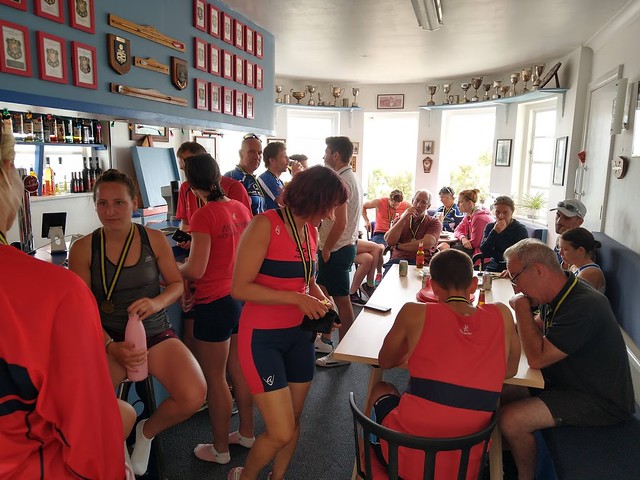 May 4, 2016 tomgray1086 Comments Off on Three Forts Challenge Race Report