A very busy weekend for Tuff Fitty. We had Tuffs out at our Saturday morning run, & early evening pool swim. Sunday saw members out cycling and then at lunchtime the last of our scheduled summer sea swims. So four training sessions to choose from, but as well as this, many Tuffs were at a vast array of races with individual & team wins, plus another Tuff becoming an Ironman. Such a collection of activities has proved difficult for the editor to fit everything – which is just how we like it. Therefore this edition restricts itself purely to race reports from Saturday – there are further editions to come for Sunday’s races which include Ironman, Triathlons, Runs & another swim race.

If anyone is viewing this thinking Tuff Fitty gets up to a lot, well why not come along to any of our training sessions and meet everyone? You are welcome on a trial basis before needing to look at membership. We can help you towards your multisport goals and you can join the camaraderie and fun from one of the most vibrant clubs around.

A swim event staged by Sussex Trail Events of our own Chris, Danny & Jay, held on Worthing seafront by the Observation Wheel being the venue for a choice of 1.5k and 3k swims.

The 1.5k swim followed one lap and there were some strong Tuff swims. Stephen O’Donnell just missed out on a podium in 4th position and Ross Court ran up the beach in 6th position overall. Verity Lacey was 9th and our newest member Michael Knibbs was 10th. Four Tuffs in the top ten – impressive.

Things got even better as the 3k swim drew to a close with these swimmers having to complete two laps. Nicole Patterson-Lett was the first person overall with a healthy 44 second lead over second place. Craig Hunter came home in fourth position.

Congratulations to all six, all in their respective top ten – excellent work.

A good value race with burger and medal, and great weather, staged by our own Jason Rae at Southern Multisports. In fact the heat got quite oppressive on the run but made up for it afterwards as Tuffs sat on the grass with their burgers and drinks. The one slight bit of pressure was that Tuff Fitty were the reigning team champions so a rallying call went out to maximise attendance. The route was a 10k lap and the marathon runners started at 10am to complete four laps, the Half at 11am for two and the 10k at noon.

Often in team races it is a case of the best counting towards a trophy but what is nice is that every competitor scored points with an accumulator for age, gender and distance, so every Tuff that was cheered over the line contributed to our eventual points haul.

Amassing four laps for the marathon and a hatful of points, total respect goes to Paul Atkinson & Aivis Vitols; (above) exceptionally strong running finishing in 9th & 11th respectively. Nick Bolding completed a three quarter distance marathon and his detailed report is shown below. Make no mistake this was a tough undulating course with 3,600ft of climbing for the full.

The Half Marathon was next and the Tuff contingent really beefed up the points as the number of Tuff finishers was just under a quarter of the field. It wasn’t just quantity but quality as Jon Babbage ran in 2nd overall in just 1:47. Clive Patterson-Lett was third – also in 1:47 and Lee Bishop, fourth. Tuff vests were returning to the cricket field in their droves Iris Bennett was next home with a notable time although she was disappointed that she lost time due to a ‘detour’. Jon Roper, Tiff Orton and Charlotte Lattin-Rawstrone followed. Clive Harvey, Clare Worgan, Shelley Babbage, Glenn Parisi and Rachel Brunning took our tally to 1,239 points – it was tight; but Team Tuff hadn’t given up yet.

This was because our team of 10k-ers were now on the course. Simon Thistlethwaite was 2nd overall and Paul Martin 4th overall. Steve Custance was next and pleasing to see Becky Lintott-Clarke finishing with Honey to secure 1st place cani-cross. Stuart Harvey was next and then Nicole Ewer undertaking her first Cani with Zac running with Jane Custance. A special shout to Claire Luckham who jettisoned her time to help an injured runner, although did complete. That was a fantastic 23 Tuff collective ensuring trophy retained with Arunners in 2nd and Run Academy in 3rd. As one person was overheard saying “we beat ‘proper running clubs”. Well done to Tim McGrath and Linda Wright who also competed under their running club colours. Click on the photo below for the album 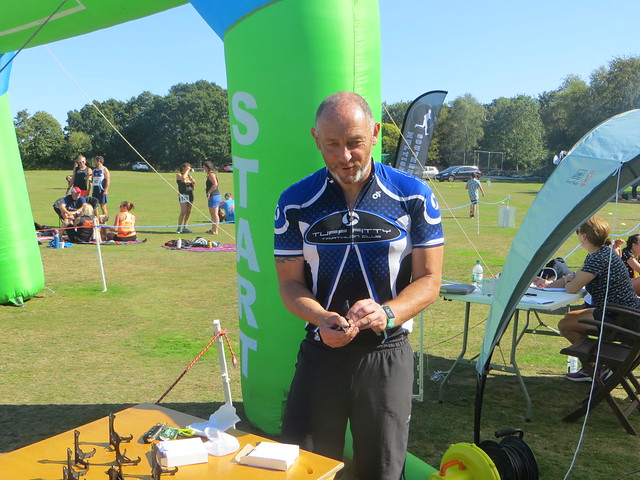 “Come along to Rewell Wood Running Festival” they said “There’s a 10k, half or full Marathon… loads of Tuffs are going, it’ll be fun!” they said…

Well, the Mrs was going to be away for a long-weekend ‘with the girls’ in Portugal so I figured I might as well keep myself out of mischief… and signed up for the Marathon distance.

Now, I’ve not run further than a half-marathon since April 2016, so this was perhaps a somewhat rash decision – but I’ve ‘got form’ in this area, last time SWMBO went away with the girls I wondered if I could ride 100km, having never ridden further than 40km in one go ever… (I could, but that’s another story!).

I put it to the back of my mind until about a week before when I used it as an excuse to eat everything in sight “I’m pre-fuelling… honest!”. Rolled up on the day thinking I’d just go easy and see how it felt, after all this was kind of an experiment, not really a race.

Milling about at the start everyone looked very serious and well-prepared – walking poles, hydration vests etc. hmm… well, I’ve always hated carrying anything and I had my specially purchased collapsible cup and a couple of gels, so I’d be fine… wouldn’t I?

Then with very little ado, we were off! Soon got into a pace only marginally faster than warm-up pace on a track night, chatting with a chap who’d run 460 marathons over the past 3 decades… four.hundred.and.sixty… my mind was so boggled by that that we missed the first turn into the woods and three of us ran up someone’s drive – oops! I mean the turn was easy to miss… it only had a large luminous green sign on a post… and a large spray-painted arrow on the ground… and a hanging ribbon… ahem!

First lap was really just to learn the course and it is an absolute smorgasbord – grass, gravel, tarmac, woodland trails, chalk, flat, uphill, downhill, gentle gradients and steeps that would challenge a mountain-goat, plus great views over the surrounding countryside – lovely!

I found a comfortable pace and trotted round, pause for a drink at the bottom of the ‘Steps of Doom’, walked up them – after all I’d have to do this three more times… then before I knew it I was heading back toward the Cricket club, waving at the Tuffs who’d just started the half-marathon. Around an hour for the first lap and I felt good. Pause for a drink at the feed station before heading out for lap 2.

Still running at what felt like a comfortable pace, caught up with some of the runners in the half, if anything the course felt a little easier as I knew my way so could just enjoy the run rather than keeping an eye out for trail markers.

Drink at the bottom of the steps, walk up… crazy downhill, woods, steep climb, farm track aaaaand… we’re back at the start, still feeling good – this is going to be okay…

Then out into the long climb… it was midday by now and getting hot – I don’t do well in the heat… slogging up a track the lady in front of me just caught a toe on rock and went down, with no chance to break her fall with her hands it was a hard faceplant and as another runner and I helped her up the blood was dripping freely from her chin… “That’s going to need stitches…” said the other guy… Luckily she had a phone on her & her husband was nearby plus a friend of hers happened to be there and offered to stay with her.

On I went, I must admit, I was rattled – this wasn’t the first faller I’d seen, it’s an inherent risk in trail running. I was really feeling the heat now, the Tuffs I’d passed previous caught me up and passed me, pausing to check I was Ok… “Yeah, just overheating…” I plodded on, I’d cool down in the wooded stretches, start to jog then as soon as I came out into the open I’d just grind down to walking pace, it felt like my brain was being steamed inside my skull.

Caught up with / was caught up by some Tuffs… chatted and walked – looking back now it’s a bit of a blur, though I thought I was OK at the time. ‘Steps of Doom’… again, at the top I thought to myself “No way I can do these again” I was done, this was now about getting back to the finish line and calling it a day. Calves cramping, toes cramping, feet cramping, each breath feeling like I was sucking air through a heated towel; this was not fun any more.

I made it back to the start/finish line and told the marshals I wasn’t going round for lap 4 – such a relief! Cold drink, crisps, choc-bar, another cold drink and half an hour chatting with Tuffs in the shade and I was feeling better.

I’ve sailed all my life and one of the rules I’ve always stuck to I learned from my father:

Deciding to run a trail marathon with no proper preparation was foolish but if I’d pressed on for another lap, that would have been reckless.

That said, it is a great, challenging course, well marked and the buzz and camaraderie were fantastic – whether it was fellow Tuffs before, during and after the race or the ‘fellowship of the run’ on the course with everyone looking out for each other and providing encouragement.

I’d love to name-check everyone for their help out there, but I’m really bad at names and rather than leave anyone out I’ll just say thanks to all my Tuff brothers and sisters, you know who you are!

Every time I’ve run a marathon I’ve said “Never again…” but I’ve already got some ideas for how to handle the heat better and figured where I can get some decent hill training sessions in… next year I’m going the distance!

Claire Moyle took part in the New Forest 100 Sportive. Whilst not a hilly course it was defintiely an Epic course – a full 100 miles from Ringwood. The course then went out to the east of Salisbury before heading back over the river Avon. Congratulations Claire, great work

At Littlehampton Park Run Jenny Oliver ran and chalked up another PB – that’s four weeks on the trot – 11 Park Runs completed of which 8 were PB’s – a great lesson in steady improvement. Adrian Oliver was on the organising team this week acting sweeper a task that saw his usual time more than double! Horsham Park Run saw Ian & Leigh Moore in action running round together. At Worthing Park Run Dave March demonstrated his coaching credentials in an excellent way crossing the line in 19:44. Chris Sloggett was next in 21:44. Ed Lay (prior to his tri the next day) and then Elaine Rousseau completed the known Tuff Park Runners this week.