This last weekend was a fantastic one for Tuff Fitty; a new record attendance at our Saturday swim. Saturday run, and on the Sunday; bike rides, a qualifying race and a great team effort in a 10k with plenty of bling and trophies. However just 36 hours later with the upgrade of Coronavirus advice, the training and competitive landscape was decimated. Tuff Fitty’s stance has already been widely published on our website. Your committee/Coaches are now striving to harness our superb camaraderie and utilise our website/social media to ensure we can continue to motivate each other and continue to train. Equally important we wish to fully live by our #NOT2TUFF2TALK mantra and implore any Tuff not to hesitate to reach out to each other as required.

But for the final Round Up before the ‘bling’ starts to dry up; some great reads:-

Last year Tuff Fitty won the team prize in the West Worthing 10k so there was talk of mustering a team. A bit of a negative in that it was very windy (again), overcast and with the ladies toilets at Sea Lane shut, it was an interesting sight seeing a huge queue of men and women lining up for the two traps in the gents loo! (a significant social gathering?). The positive; whilst several running club vests started to emerge from under the warm coats, the ‘vestage’ of Tuff Fitty, with everyone in the latest strip was outstanding.

Starting just east of Sea Lane Cafe the route followed the road around the crescent before heading up onto the prom before the yacht club and then a straight out and back all the way down to the shelter close to Windsor Rd.

66 runners turned halfway for the 5k but all the Tuff contingent were making excellent progress amongst the other 250 runners in the 10k. First Tuff home in an excellent 6th position overall was Jon Babbage in just 38:32. He was justifiably chuffed with a new pb which was 2.5 minutes quicker than last year. Next home was Simon Thistlethwaite 8th overall in 39:12. Simon also improved his time from last year moving up from 12th by 1.5 minutes. Also across the line was Paul Martin. 32nd last year, Paul smashed his time to cross 16th in 42:22.

The team prize would comprise the fastest three but there were plenty of other Tuffs who weren’t there to make up a support team. Chris Sloggett was the next home finishing in the top 50 and just behind, great running from Iris Bennett as 6th woman overall. Les Pearce had a great run to finish 2nd in his age group and then Clive Harvey; happy to have been quicker than last year. Clare Worgan was delighted to achieve yet another pb; and then James Brock who had a good run, and pleased to see his Tuff mascot Billy the dog (held aloft in the above banner shot). Shelley Babbage ensured that all the Tuff contingent finished comfortably within the hour, and she deserves special mention for then deciding to run home to Littlehampton!

Three in the top 16, had we done enough? a huge cheer went up as Tuff Fitty were announced as team winners, defending their title. The good news didn’t end there as Simon was called up to receive a trophy as first male vet – excellent.

Those Tuffs registering early sheltered from the wind for a coffee and the hospitality continued afterwards whilst awaiting prizegiving. The old adage of ‘get a group of Tuffs together and a good time is had by all’ was certainly proved. We must ensure this great camaraderie continues over the coming difficult weeks. Click on the photo below for the album:- 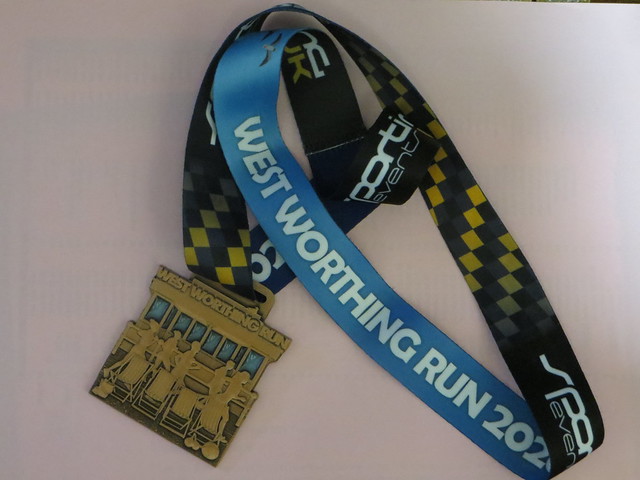 As well as Billy Brock welcoming everyone over the line we are indebted to Phil Turner. Not only did Phil come along to cheer, he had his Go-Pro in hand. He has produced a great video of the morning which is shown below. Phil has been invaluable in setting up a Tuff You Tube account for us which is likely to be a useful medium to use, particularly over the coming weeks when individual training will have to be to the fore.

The Bedford Autodrome was the setting on Sunday for a Duathlon, pan flat, fast with some technical turns and accredited draft legal for standard road bikes – no TT’s allowed. Stephen O’Donnell was flying the Tuff flag.

An 8:30 start would see competitors embark on a 5k (two lap) run around the west circuit of the aerodrome, before four laps of the northern and southern aerodrome circuit to amass 20k of cycling. Back into transition for the third leg, one 2.5k lap of the run course. Stephen modestly reports that ‘it was over more or less before it started to hurt too much’, although the fast flat course was more than offset by a howling gale. Coronavirus was already having an impact with Stephen reporting the field was reduced, although that doesn’t detract from a great performance in what was his first ever Duathlon. Stephen finished first in his age group by 1.5 minutes.

Next up we report on a very busy weekend by Claire Moyle; she reports

“This weekend I have completed my British Cycling Ride Leader course ‘Breeze’ which is for woman only rides, so I will try and organise some for the club when conditions allow”

Also Claire ran her first half marathon up at Hampton Court.

“Well this was my first half marathon and didn’t prepare as well as I would like, but I drove up early and took in the atmosphere and was quite excited about running it. There was a very cold wind but it was on my back over the first 5k and I felt good. Up, over the bridge and into the headwind but it was dry underfoot and I felt good. At 10k I was just outside my PB and quicker than at Chichester harbour so I pushed on knowing that at the turn I would be out the wind and heading towards the 10 mile mark. Yes a PB at 15k and I was heading into the Royal Park and then the reality hit. I was very tired and my muscles and joints where screaming, ‘stupid fool you are to old for this’, but I knew I could finish, I just had to dig deep, out came the jelly babies and slowly, and I mean slowly, I completed the last 5k. My heart felt very proud I had met and completed another challenge.

Unfortunately Coronavirus had stopped all Parkruns in 15 countries as at this weekend, but since this time notification has been issued that all Parkruns in the UK have now ceased as well with no further runs from Saturday 21st March at least for the next few weeks.

So this is the last Parkrun round up, hopefully for not too long. At Worthing Parkrun it is pleasing to see Dave March coming back into form after injury. Dave was first Tuff home in 20:41. Good work from Les Pearce chalking up his 124th PR. Just 1 second behind was Chris Sloggett in his 136th run. Next home was Amanda De Ridder, crossing as the 7th female overall. Dan Fitzgerald rounded up the Tuff quintet and well done to June Fuhrmann who was on the organising team this week.

Littlehampton Parkrun saw Nicole Patterson-Lett cross as 4th female overall having run round with Clive Patterson-Lett. Next Tuff home was Vicky Cooper and then pleasing to see Jenny Oliver on the comeback trail after injury. Next home our newest member Alistair Evans (Chris Evan’s brother) who has amassed 45 parkruns.

Finally another of the 715 UK parkruns had a Tuff presence as Trevor Harvey ran at Skipton Parkrun, a four lap hilly course.