The National Aquathlon Championships were held at Arundel this year and staged by our friends at Raw Energy Pursuits. Centred around the Black Rabbit Pub, all the competitors were fulsome in their praise for such an idyllic setting with the castle as the backdrop. Whilst the autumnal time of year meant it was chilly first thing the sun rose for a clear blue sky and great racing conditions. The river Arun’s temperature had eased to 16.1 degrees but a large pontoon gave easy access and a 30 metre warm up to the start. All competitors completed the 750m swim on slack water before heading into transition. From here it was a run down Mill Road and around Swanbourne Lake for a 5k run finishing outside the Pub.

Thirteen Tuffs participated with perhaps no surprise to see Drew Gowland with the quickest Tuff swim split of just 10:53 with Andy Tester & Joe Pascoe on 12:30 and 12:32 respectively. Joe then had a storming 58 second transition and delivered the fastest Tuff run split of 18:19. Clive Patterson-Lett 19:20 and Gavin Sewell 19:59 had our second and third best run splits.

We have two reports submitted. Firstly from Gavin Sewell who had a good race reporting:-

“After the disappointment of Outlaw and the bike cancellation, I needed to get my mojo back so entered a sprint aquathlon. Thinking “yeah I’ll be fine how hard can it be after doing  all those miles for outlaw.”  Well it was hard. It was a lovely day and was great seeing so many Tuffs helping REP and racing. I forgot how much I missed the local events with plenty of friendly faces. Myself and Tom did a quick warm up run before setting up in transition. Good to see Wardy, Tiff, Jon, Jane and the Harvey’s helping REP out.”

“Clive, Joe, Drew, Kev and Glenn were also racing plus many more Tuffs than I can mention. The swim was cold, I got in the wrong position and didn’t get clear water until the 2nd half of the swim. Transition was long but once I had my trainers on I felt comfortable. Running round Arundel on a sunny morning is always good but my body wasn’t used to going this fast. It hurt. But happy with a sub 20 5k. Great event and well supported. And the coffee and sausage sandwich was worth the wait.”

Next up a report from Joe Pascoe, who advised:-

With all these reasons, and cracking weather, I couldn’t help but enjoy myself racing this weekend.  It was my one local race of the year and great to see so many familiar faces.

The swim was tough but great conditions.  The wave Tom and I were in seemed pretty small, so even more chance of being at the sharp end.  In fact, with only 8 in the age-ground, it was a top 10 performance before the start!

I came into the pontoon quite relieved that the swim was done and I could get down to a proper sport that you can compete standing up – not lying down.   I was launched up the pontoon by the marshals and then promptly walked in a very civilised way up the steps.

In to a minimum transition, where thanks to Tom’s advice I’d left my shoes near a Mini.  It seemed to take ages to get the wetsuit off and get running.  On the way out, I saw Drew coming into transition and was quite chuffed our resident dolphin hadn’t overtaken me on the swim (note: he started at least 2 minutes behind).

The run felt strong and thanks to many lido races the course was very familiar.  The temperature was good. There was enough twists and turns in the course to make it interesting. Spurred on by knowing that I’d have to take 2 minutes out of Drew, to make up for his impressive swim, I managed to take a place 10 places and scenery was perfect.  Great support on the course from Nic, Graham, Katie and Tania.  Overall finished strong 27th overall and 3rd in AG – picking up a silver AG medal.

A fabulous morning’s racing from a Tuff perspective. As you have learnt from the above report, Joe climbed up on the second step of the Tuff podium to collect a silver medal. Whilst open to all racers it was only British Triathlon members who would be eligible for medals and there was a long delay before it transpired that Tom Goddard had secured a bronze medal – excellent. The good news didn’t end there as Drew Gowland, despite being self deprecating about his run speed did well, and secured a bronze medal in his age group – A trio of medals – superb work.

Photogallery below – If other racers downloaded photos and wish to add them to the gallery, send across to the editor 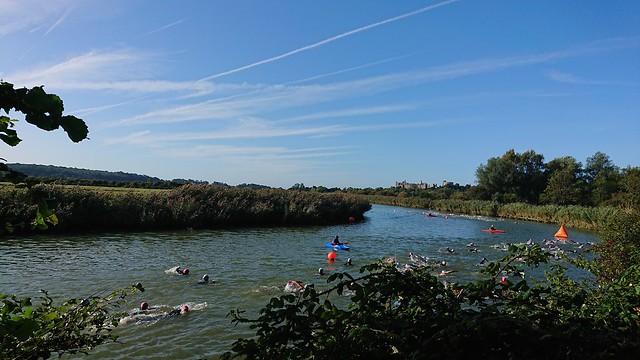 A very popular 10k which this year included a 5k for the first time and overall there were just over 1,400 finishers making this a great fund raiser for Chestnut Tree House. Without a club search in the results, hopefully all the Tuff participants are included here – all of whom ran the 10k.

First Tuff home was Jonathan Babbage; suffering from knee pain but that didn’t stop him punching out a terrific 38.52 for a new PB. This secured 26th place, amazing with that number of competitors. Aivis Vitols was another one showing what a great Tuff he has become, finishing in 43.09 for 60th. Tim McGrath was our third place Tuff finishing in 93rd position in 44.14.

At Worthing Park Run, Jay McCardle was the first Tuff home in a swift 20:44. Next, straight after his Brutal Full Distance Tri was Danny Cunnett in 22:24. Amanda de Ridder was 10th female and 2 seconds ahead of Chris Sloggett and then Ed Lay who is closing in on his 50th having completed number 48. Across at Littlehampton Park Run, congratulations to Jenny Oliver who achieved a further PB shaving a further 17 seconds off last weeks time to record her third successive PB. No Run at Bognor this week, but up at Horsham Park Run, Ian Moore was in action again notching up his 68th Park Run

TUFF VELO/COFFEE RIDE Don’t forget next week – Saturday 21st we are holding a Tuff Velo/Coffee Ride in conjunctions with Edgecumbes Coffee Roastery at Ford. There is a Facebook event post where we need to get confirmation of attendance and don’t forget by wearing cycle gear there is an offer on coffee and cake! Meet at Ford by 8:15 from where the routes start. If you do not use Facebook, please make Clive Harvey or Richard Hobbs aware of your intention to attend.

SCRAM -Saturday 21st September. Our usual Saturday evening swim session starting at 5pm. Please arrive as usual and pay your £4 swim fee in the reception area circa 4.45. For those of you wishing to undertake just the swim, everything is as normal. However we are introducing a SCRAM – Swim Coach and Run Around Mewsbrook. Depending on the level of interest we will commandeer a couple of lanes towards the end enabling people to have a timed 400m. Then it is on with the trainers for a couple of laps around Mewsbrook Park = this will be circa 2-2.5k. No extra charge if you are doing the SCRAM, but you may wish to do the swim in your trisuit and of course, bring a pair of trainers.

RACE KONA – This great initiative is to see Tuff Fitty descend on the Spin Studio in the Wave to pedal whilst following the bike action at Kona – Already extensively advertised for October 12th but worth mentioning here as the Bike availability is going quickly. If you wish to take part but haven’t got a team, we may be able to accommodate you. Please email Nicole Patterson-Lett nicole_p99@hotmail.com or facebook meesage

ANNUAL GENERAL MEETING This year has rushed by and we need to start thinking about our Annual General Meeting. The venue has now been booked for October 26th from 6:30pm – straight after our Saturday swim coaching. We would value your attendance but worth stressing no-one will get pressurised into joining the committee